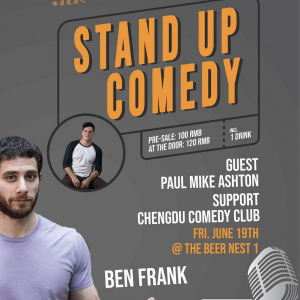 Ben Frank is an American stand up comedian based in Shanghai, who has headlined comedy clubs around Asia. He also frequently performs alongside prominent international comedians such as Kurt Metzger, Kyle Kinane, Mark Normand, James Adomian, and Dwayne Perkins. Ben has been a top headlining comedian at Kung Fu Komedy in Shanghai, mainland China’s first full-time comedy club. Ben’s act is full of original and hilarious observations about modern society, dating, and the experience of being an expat in Asia. When Ben isn’t doing comedy, he works for the National Basketball Association (NBA), primarily developing NBA-themed attractions in China.

“One of Shanghai’s slickest and most recognizable comics” -Timeout Magazine

Paul Mike Ashton is an up-and-coming gay comedian based in Shanghai, China. Originally from Lancaster, Pennsylvania, he has showcased in Shanghai, Taipei, Xiamen, and other Chinese cities. A versatile performer, Paul Mike has also toured with superstar improv group People's Republic of Comedy at the Manila and Hong Kong Improv festivals, and was runner-up at the premier Mx. China Pearl Drag pageant as drag alter-ego Lady N. Gentlemen. He combines a unique take on masculinity and his experiences abroad for a distinctive comedic performance.

Dan Russell: From Boston, USA, Dan Russell performed regularly in NYC before moving to southwest China in 2013, where he has been a mainstay of the local comedy scene. He organized the first English-language comedy shows in Chongqing and is the manager and co-founder of Chengdu Comedy Club and the organizer of Chengdu Roast Battle.

Let's be honest, Jacob Wanuch is an English teacher in Chengdu; however, having secured a cushy teaching job, he has been developing as a writer, comedian, director, and events organizer. He is the co-founder of CowPen (牛笔), a sketch comedy group whose debut video can be found on YouTube. His style employs wordplay (read: dad jokes) and vulgar confessions, occasionally combining the two in ways that are definitely not cool but are, apparently, funny.