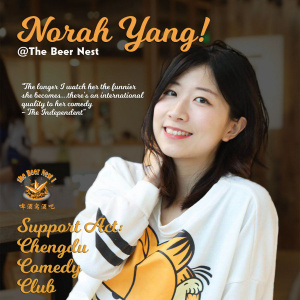 Norah Yang, live in Chengdu. English show!
Born and raised in China, Norah is a stand-up comedian in both English and Mandarin. She started two years ago, performed 600+ shows in 10+ cities across China, US and Japan, and has already opened for several international headliners including Mark Normand and Kate Willett. Norah has also appeared in several international comedy festival including 2018 San Francisco Comedy Competition.
“The longer I watch her the funnier she becomes...there’s an international quality to her comedy - The Independent”

"There is an international quality to her comedy, coupled with levels of calm and conficence that belie her youth" - The Independent UK