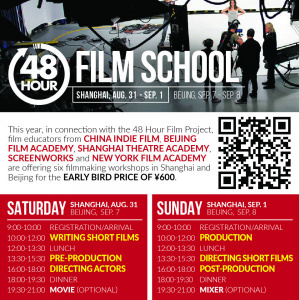 This year, in connection with the 48 Hour Film Project, film educators from China Indie Film, Beijing Film Academy, Shanghai Theatre Academy, Screenworks and New York Film Academy are offering six filmmaking workshops in Shanghai and Beijing for the early bird price of ¥600 (¥800 regular, ¥1000 late). The significantly discounted price includes all six film workshops over the course of two days, and qualifies you to receive up to ¥5,000 for your short film.

Whether you’re a professional, pre-professional or hobbyist, you’ll gain solid foundations and advanced insights in writing, directing and producing your short film in a relaxed, seminar-style environment, with questions, answers, examples, handouts, lunch and dinner breaks, culminating in a networking mixer with industry professionals.

Two weeks later, at the 48 Hour Film Project (see below), you’ll be able to put your skills and knowledge to the test, if you so desire, in a global filmmaking competition.

All individuals who enroll in 48 Hour Film School Shanghai will qualify for a chance to receive up to ¥5000 RMB in reimbursements for their 48 Hour Film Project team (see Questions below).

48HFS is a consortium of international film educators dedicated to bringing an array of affordable film classes across China to anyone with a passion for the craft.

Peter Walters is an American screenwriter working in the Chinese and American film industries. He teaches screenwriting at Beijing Film Academy and is the co-founder of Scripted Studios and director of China Hollywood Society’s Beijing chapter.

Richard Trombly is a film, television and stage writer/director/producer with numerous shorts and features. He has taught film and media at Chinese universities, including Jiaotong University in Shanghai. He is the founder/director of China Indie Film.

Nico Amedeo is an actor/director based in Shanghai with extensive experience in the Meisner Technique, Fitzmaurice Voice Training, Body Architecture Physical Theatre and Commedia Dell’Arte. His stage and film credits include Hamlet, A Streetcar Named Desire, The Fixer, To Shanghai and Ip Man 4.

Keith Collea teaches producing in Shanghai and supervises large-scale productions such as The Monkey King, Gone With The Bullets and Gui Chui Deng in China, and Independence Day, Titanic and Pearl Harbor in the United States.

Tian Ye is a rising star in the Chinese industry. A graduate of Beijing Normal, he earned his MFA in Directing from UCLA. His short, Rice Wine, garnered international acclaim, paving the way for his first feature Hua Shi Ru Qi, premiering this year.

Brendan Davis is a producer/director based in Beijing & Los Angeles whose films have premiered at Sundance, Toronto and Berlin. Davis produced the Chinese series Jia Pian You Yue featuring Stan Lee and M. Night Shyamalan. Prior to China he taught at New York Film Academy in Los Angeles for six years.

Scan or extract the QR above to join the official WeChat group for 48 Hour Film School Shanghai for ongoing news and updates.

The 48 Hour Film Project is an international event bringing together teams of filmmakers in a worldwide competition. Click here for details.

Do I have to sign up for the 48 Hour Film School in order to be eligible for the prize?

When will the award be given?

The winning participant will be chosen and announced during the closing ceremonies of the 48 Hour Film Project. The reimbursement will be given immediately upon reasonable proof of purchases, or in the days immediately following.

What factors will determine who wins?

Random draw. The more individuals on a team who sign up for 48 Hour Film School, the more chances they’ll have to win.

Doesn’t the idea of giving a team ¥5000 for their 48 Hour Film Project go against the basic principle of 48, which is that everyone does it for free?

The basic principle of 48 Hour Film Project is that everyone completes their film within 48 hours. Sponsorship—and even product placement—is allowed.

48 Hour Film School is willing to randomly sponsor one team who meets its requirements with a reimbursement of up to ¥5000.

There are many organizations around the world encouraging individuals and teams to shoot a film from start to finish, within certain guidelines, within 24, 48 or 72 hours.

Arguably the largest of these is the international 48 Hour Film Project, an annual competition in which teams are assigned a genre, character, prop and line of dialogue, and have 48 hours to create a short film containing those elements.

48 Hour Film School, conversely, is a much smaller organization dedicated to bringing an array of affordable film classes across China. These classes are sometimes held in the weeks leading up to 48 hour film efforts, but more often not. 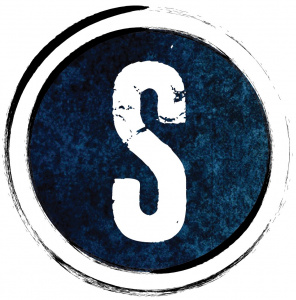 Understanding China through the lens of film.

What’s showing (and shooting) in and around China.