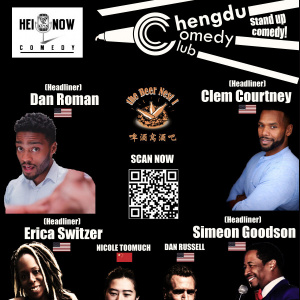 ** This show is POSTPONED due to the Coronavirus **

** This show is POSTPONED due to the Coronavirus **

"Simeon Goodson should be a household name in comedy"

Simeon Goodson is a native of Brooklyn, NY who has been performing in the comedy clubs, bars, and alternative venues of New York City since 2004. He has performed at a variety of world famous venues including Caroline's on Broadway and The Brooklyn Academy of Music. In addition, he has performed across the United States with the "Comedy' Best Kept Secret Tour" and as the opening act on the Hannibal Burress "Comedy Camisado Tour".

In August 2015, Simeon moved with his family to the United Arab Emirates to further expand his worldview. Diving head first into the local comedy scene, he was the winner of the Dubai Comedy Festival’s Beat the Gong contest that year and in 2017 filmed for Comedy Central Arabia’s Stand Up al Wagif Season 2. 2018 brought Simeon and his family to Wuxi, where he continues to pursue international stardom, this time in the centuries old provinces of China.

Erica is a Chicago-born, Shanghai-based educator, comedian and public speaker. She is a showcase comedian at Shanghai’s top clubs known for her unique energy and raw, biting wit. In addition to heading up Hei Now Comedy, Shanghai’s premier Black comedy crew, she recently became the first Black comedian to perform in Mongolia at the inaugural Silk Road Comedy Festival.

Dan Roman is a rising star in the Shanghai comedy scene.  He is a founding member of Hei Now Comedy, Shanghai's premier Black comedy crew, and plays with the People's Republic of Comedy Improv.  You can see him in showcases at Shanghai's finest clubs and across Southeast Asia.

Lily Ma is a regular performer on showcases in Shanghai. and a featured comedian in cities across China. Her unique comedic perspective, a fusion of her traditional Chinese background and passion for cutting-edge Western stand up, along with her millennial perspective on sex and feminism, makes her one of the most exciting voices in the Chinese comedy scene.

Dan Russell: From Boston, USA, Dan Russell performed regularly in NYC before moving to southwest China in 2013, where he has been a mainstay of the local comedy scene. He organized the first English-language comedy shows in Chongqing and is the manager and co-founder of Chengdu Comedy Club and the organizer of Chengdu Roast Battle.