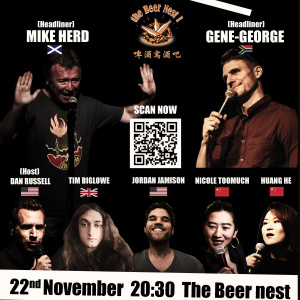 Chengdu comedy bring their unique variety of comedy styles to The Beer Nest again. Check out the line-up..

Mike Herd: A Scottish stand up based in Shanghai, China and has been active since 2016. Mike blends dry wit and Scottish cynicism to create hilarious observational story telling comedy based on his experiences of being a Scot living in china with many an ode to his long suffering wife. His experiences as a Maths teacher also make up some of the stories he shares. He has performed in several Chinese cities including Shanghai with Shanghai Comedy Bunker and Comedy UN, Beijing, Xiamen, Hangzhou and Nanjing where he runs a once monthly headliner series. He has also performed extensively in Scotland, particularly in Glasgow and the surrounding areas, Edinburgh and last summer performed in London for the first time at the prestigious Up the Creek comedy club in Greenwich. He brought over Chris Henry for his tour of China and most recently opened for Phil Kay in his china tour.

Gene-George: A South Africa born, Shanghai based comedian and both a Magner's 2018 Comedy Competition and Shanghai Roast Battle 2019 finalist. Often billed as one of the dirtier comics on the scene, he’s a Shanghai Comedy Bunker regular and has performed and opened for a variety of touring comedians around China including the likes of Phil Jupitus, Tom Rhodes and Glenn Wool.

Dan Russell: From Boston, USA, Dan Russell performed regularly in NYC before moving to southwest China in 2013, where he has been a mainstay of the local comedy scene. He organized the first English-language comedy shows in Chongqing and is the manager and co-founder of Chengdu Comedy Club and the organizer of Chengdu Roast Battle.  He also spent last year in Shanghai where he was a regular performer and the show-runner of Shanghai Roast Battle.  He is happy to be back home in the Southwest, where yelling is the normal volume of conversation.

Tim Biglowe: A recent transplant after performing regularly as part of Stand-Up Hanoi (Vietnam), he has featured for Carey Marx and Greg Fleet and bought his solo show to the Edinburgh Festival Fringe in 2016.

Jordan: Comes from the USA, Texas specifically. if you aren't offended yet, you will be after you hear him speak. lighten up, y'all. it's all in good fun.

Huang He: grew up in Qianjiang, Chongqing, a small multiethnic town. She started her standup comedy journey in the States and have been active for about two years.

She has been performing stand-up comedy all over in Washington D.C., Maryland, Virginia, New York City, Rochester NY, Oklahoma City,  Oklahoma  and Dallas Texas. And she keeps hitting mics around to get more inspirations for jokes now in China.