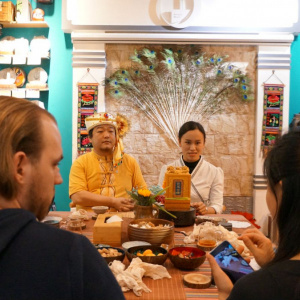 Not far away from Shanghai city center and in the quiet street of Wulumuqi South Road hides a tea house: when people pass by, some would stop and get attracted by the exotic accessories outside while getting curious about what’s inside, but hesitate to step in.

If you step one foot forward you will find another world - AncientMoon(Guyue) Tea House brings a small Yunnan here in front of you.

Yunnan is a boundary southern land of China. When people think of Yunnan, these images enter their heads first: flowers, sunshine, snow mountains, exotic minority cultures, and the best Chinese tea.  Yunnan is regarded as an extremely (if not the most) mysterious area in China. It is so far off, some places remain unreachable, and the cultures are so diverse and exotic.

Located in the Southwest frontiers of China, Yunnan Province features rough terrain which is dotted with cloud-veiled mountains and crisscrossed with meandering rivers.  The Province has abundant rainfall, mild climate and fertile land, all of which prepare ideal conditions for tea cultivation, and Yunnan is the homeland of tea trees. Therefore, Yunnan has rich varieties of tea trees and excellent tea species.

If given a chance to experience the unique Yunnan ethnic group's cultures, understand its tea history and what's more, brew the tea leaves in the most traditional way in the vibrant Shanghai city centre (yes, you heard me!), would you grab it?

Entering AncientMoon is like stepping onto that far-off and mysterious land of Yunnan. The background music, the host in traditional costume welcoming you, the exquisite handcrafts hand made by people from remote villages...Your eyes will be dazzled by the colors around you - so vivid and vibrant, just like what that far-off land is like - wild, exotic, sunny and full of life.

At AncientMoon, one is privileged to have the opportunity of experiencing a Chinese tea culture that is so different from all other areas of China: teas that were grown and fermented in Yunnan, tea deserts which can only found in Yunnan, mysterious tea brewing methods of local ethnic people, and unique pottery of brewing and drinking tea.  It is certainly an enriching, eye-opening and soul healing experience - whether it is your first time of getting to know about Chinese tea culture, or you are already a fan.

Simmer Tea - In the south of Yunnan Province there lived a group of people called ‘Pu’. Wei Cha was Pu People’s traditional way of brewing tea. Instead of putting tea leaves in cups and pouring hot water into the cups - the traditional way of brewing tea - Wei Cha used pottery as the container, put tea leaves or fresh tea branch into it and let the water boil to bring out the best flavor of the tea.

Experiencing this one would feel being taken back to the old times: sitting by the fireplace with Pu people, waiting patiently for tea to be brewed and feeling the time pass by.

In Song Dynasty people would roll tea leaves into a ball-shape to make it more storable while keeping the best flavor of tea, they called it 'Tuan Cha'. But the way of making a good Tuan Chuan was way too complicated and not good for the ordinary people to learn, so Tuan Cha became less and less popular. Ethnic Yunnan people found a new way to simplify the process - they chose Pu'er tea leaves and rolled into smaller balls, and named it 'Dragon Ball'. At AncientMoon, we could also experience making our own tea dragon balls and bring back as a gift!

In a nice day one could sit at the backyard of this exquisite tea house, appreciating the tea from that far-off land which were planted by exotic group people, while being surrounded by French style 'chateaus' near Shanghai city centre, it surely is an amazing and surreal feeling.

Do you want to join this really interesting 'Tea Party'?  Come try the unique tea experience and learn about a different Chinese tea culture!

Add our Staff to reserve your spot now

If you are looking fore more local experiences and hidden gems in Shanghai, find it here  https://dwz.cn/uGvFwZ1Z