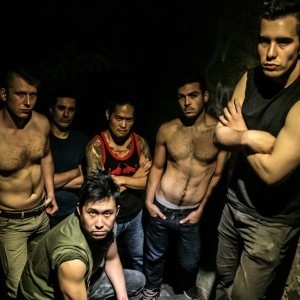 Fight Club is an unconventional story about a sleepless, unnamed ‘everyman’ who is dissatisfied and drowning in his white-collar, “IKEA” lifestyle. Lacking the understanding and conviction to change his life, he turns to the shadowy and charismatic Tyler Durden, a philosophy-spouting soap-maker, to guide him on his path to self-realization. He gets much more than that when he gets in on the ground floor of Fight Club, a secret society of men who meet in order to find freedom through beating one another into a pulp. Embroiled in a love-hate triangle with Tyler and a dissolute woman, Marla Singer, the stakes rise for our protagonist as the details of Tyler’s master plan - Project Mayhem – begin to unfold.

Inspired equally by Chuck Palahniuk’s novel and David Fincher’s cult film, Fight Club promises to be a stage experience like no other. The fluid and original audience participation will have you at the edge of your seat (or feet) as you follow the actors to different locations where the action takes place. But the violence of the fight clubs serves not to promote or glorify physical combat; instead, it is about freeing yourself from the shackles of modern life, which imprisons and emasculates men. Fight Club purposely presents an ambiguous message and challenges audience to question Tyler’s philosophy. Prepare for a stage experience like never before!