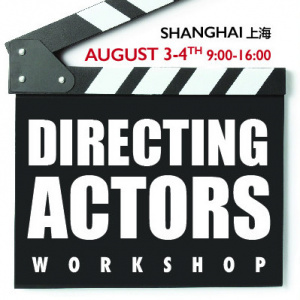 Directing Actors is a 2-day, 12-hour film workshop taught by Shanghai Theatre Academy instructor, Nico Amedeo, emphasizing the fundamentals of storytelling through actors, as opposed to cameras and lenses. Whether you’re an aspiring director or seasoned pro, Nico’s workshop helps directors understand how actors get into character, tap into emotion, make creative choices and bring the character to life. Class is limited to 10 students and will sell out.

“Nico's Directing Actors workshop was a revelation. He shared his knowledge of the craft with calm reassurance and effectively coordinated a practical component, too. Although only a weekend course, the training was diverse and pragmatic. Looking forward to what he's offering next. A worthwhile investment if you care about art.” —Paul Ash

“Nico is well-versed in drama and has all the right tools on how to finesse expressions in front of a camera. He is supportive, professional and super positive.” —Fiona Dawn

“Nico is a discerning director with a clear vision and an openness to experimentation. His instincts are on-point and he has and endless strategies for getting the best performances from the actors he works with.” —Kassi Cowles

“Nico is a wonderful director with a clear vision and relaxed personality. I’ve learned so much from him.” —Ildiko Kissimon

“Nico has a profound understanding of the actor’s process, which is precisely what makes him a fantastic director. He allows the actor all the space she needs to experiment, but will reel them back when necessary. He's direct and honest and believes in his actors’ ability to surpass themselves.” —Sophie Ni

For more information, contact Nico directly via WeChat at nicoz9k